The Stonk Market
Home Business Who is the biggest douchebag on FinTwit? 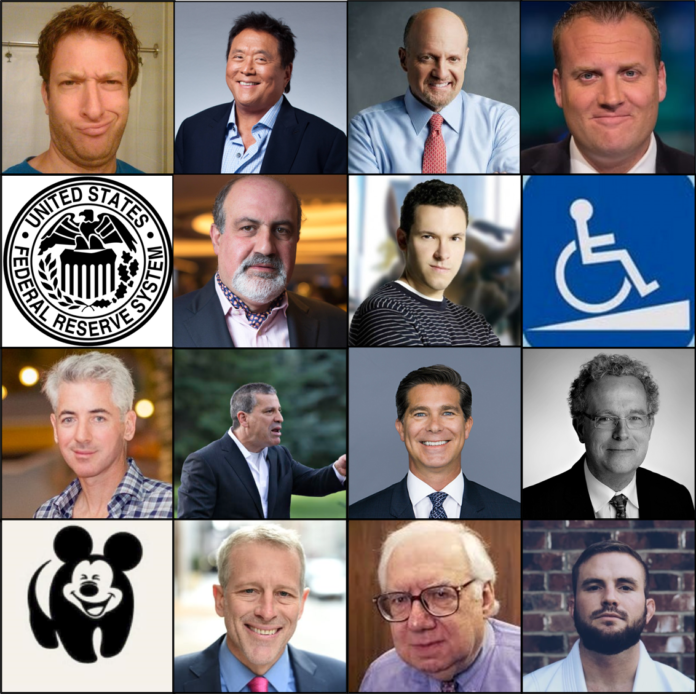 The Stonk Market is pleased to announce the commencement of the 2020 First Annual, â€˜The Biggest Douchebag of FinTwit Tourney’.

Here’s YOUR chance to decide who will be crowned the biggest douchebag on FinTwit.  The Tourney is a packed field filled with dummies, imbeciles, morons and nincompoops.  Who will be crowned champion is up to you!

Voting will be held on Twitter through Chadford Whitmore VI and Eloise William’s Twitter profiles.  The polls will be open 24 hours for each contestant, with the winner moving on to face the next douche.

You may also create your own bracket below in a contest to predict who will become FinTwit’s biggest douche.  The individual who comes in first, second and third place will receive an item of their choice from The Stonk Market’s e-store.

The Biggest Douchebags on FinTwit

Dave “El Pres” Portnoy: A former paperboy turned smut blogger, Davey Pageviews has taken the financial world by storm with the creation of DDTG, a trading company focused on getting cement head Stoolies to buy more awful t-shirts. The notches on his belt currently include Ross Gerber, Warren Buffett, Whitney Tilson and someone new everyday.

Robert “Fake Dad” Kiyosaki: A real estate cult leader/author best known for writing a fictional story that isn’t based on anything that has ever happened to him in real life. He currently has millions of cult followers and likely doesn’t actually own a single piece of real estate.

Jim “Big Papa Pump” Cramer: A bald, buffoon that has been pumping stocks since the Nixon administration while playing a clown on TV, Jim Cramer is best known for laughably telling his viewers that “Bear Stearns is fine! Do not pull your money out!”

Nassim Nicholas “Thin Skin” Taleb: Rumors are if you stack Taleb’s list of blocked users up, it would reach the moon and back five times.  This dingleberry is known for doing 50-pound deadlifts and reading philosophical books no one cares about.  He has blocked over six million accounts on Twitter for being less intelligent than him.  Currently Nassim is in the process of writing a book titled Narcissism. The book is expected to be 750 pages of Nassim trying to redefine the term narcissist – a way for Nassim to tell the world he isn’t a narcissist.

Timothy “Massive Virgin” Sykes: No need for an explanation.

Ramp “Faker” Capital: Literally the only personalities on FinTwit who fakes being paralyzed to get followers. But for some reason FinTwit loves this guy even though he doesn’t even tweet about finance – which automatically got into this list of pristine douchebags.

Bill “The Silver Penis” Ackman: Once described as a “penis with silver hair”, Bill Ackman is best known for having John Hempton’s huge brass balls dragged across his face. The two hedge funders are well known for public battles over the years with their opposing positions in Valeant Pharmaceuticals and Herbalife, which ultimately had Hempton prevailing in both instances.

Charles “Gorillarino” Gasparino: Pullups, Vodka, bananas and fanny packs! Charles, better known as Chuck, is an angry gorilla who tries to pick fights with people on Twitter.  Once a Journalist for CNBC, Chuck is now working for the failing Fox Business Network, unleashing breaking news stories no one cares about.

Ross “Elon Fangirl” Gerber: Like herpes, Ross Gerber is the gift that keeps on giving when it comes to being a dumb idiot/Elon fangirl on Twitter. In case you haven’t heard the 14,000 times he has said it, he has $1.1B AUM of other people’s money, which he likes to claim on Twitter is actually his money. Ross is a few years away from being “best known as a former investor, now newsletter writer”.

John “Brass Balls” Hempton: A self-proclaimed douchebag, the esteemed Mr. Hempton is truly a gentleman and a scholar of the highest magnitude. His inclusion on this list was just to fill a bracket spot.

Barbarian “Who Is This F’in Guy?” Capital: This guy said to add him so he could retweet the contest to potentially win.  Huge red flag for being a douche.

Whitney “Captain Failure” Tilson: Best known for putting a picture of his colon in an investor presentation.  Also known for being a failed hedge fund manager turned annoying newsletter writer.

“Jowls” John W.B. Rich (Wealthy): An obese slob known for pushing children in small bodies of water and stuffing his face full of hamburgers. John’s only goal is to weigh more than the price of the NASDAQ – and he is close to meeting that goal. You can find John blogging on his website, where he talks about his fascination with Japanese Anime Kink videos.

Collin “LA Looks” McLelland: Having the most perfect hair on Twitter is an understatement. Our contacts say Collin spends over three hours in the morning putting product in his hair and staring at himself in the mirror while flexing.  Collin is the least known in this FinTwit group.  But let me tell you, he’s a big thing on LinkedIn, whatever that means. Collin is also the co-founder of Digital Wildercatters, a website that constantly posts about how Pink Petro’s Katie Mehnert is the most amazing person to ever exist.