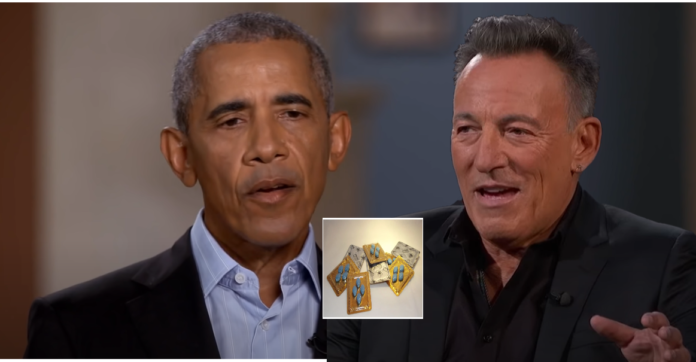 Former President Barack Obama recently announced the latest project to be released by Higher Ground, the production company that he and his wife Michelle started after Obama left office. “Renegades: Born in the USA” a podcast with who Obama describes as an “unlikely” friend — Bruce Springsteen. Primarily because half of Springsteen’s fans don’t consider Obama to be a renegade, let alone actually born in the USA.

The duo sat down and recorded their conversations for what will be an eight-episode podcast over the course of a few days in a converted farmhouse on Springsteen’s property. The podcast will cover a wide array of topics like fatherhood, marriage, and the state of America, Spotify said in a statement to CBS News.

This project is ground breaking in many ways.

A former president entering the content creation business, with a rock star, no less.

But perhaps most of all, the absolutely earth shattering sponsorship that the privately funded project has locked in with Viagra.

“This was our white whale,” Erik Dix, a supremely proud Viagra spokesman told me. “There won’t be a single male—ages 35 to 70 that doesn’t listen to this podcast. For Bruce’s older fans, we have already started a boots on the ground distribution system to help them download Spotify and access the content. There won’t be a soft pecker left in the U.S. of A!” He exclaimed.

When asked if he was concerned about Springsteen’s far right-wing fans Dix did not seem worried, explaining that at the very least these people would tune in for a few episodes to hate listen. And the angry reposts will just be free publicity.

Although the numbers have not been confirmed, it is rumored that both Obama and Springsteen are receiving mid six figures per episode as a base payment from the sponsor—and all-in plus incentives, it could creep into eight figures. An astonishing payday for two men likely to toe the line on any substantial discourse in an effort to maintain their brand safe image.

Trump Demands that a Sex Tape of Hunter Biden and Mayor...

Musk Plans to Create line of EV Tanks to Supply the...

ABOUT US
The Stonk Market is a satire site focused on the dull finance and investing industry. We are currently looking for creative writers who have an interest in finance, investing and humor. If you would like to write for The Stonk Market please feel free to reach out.
Contact us: eloisewilliams@thestonkmarket.com
FOLLOW US
© The Latest News - Privacy Policy